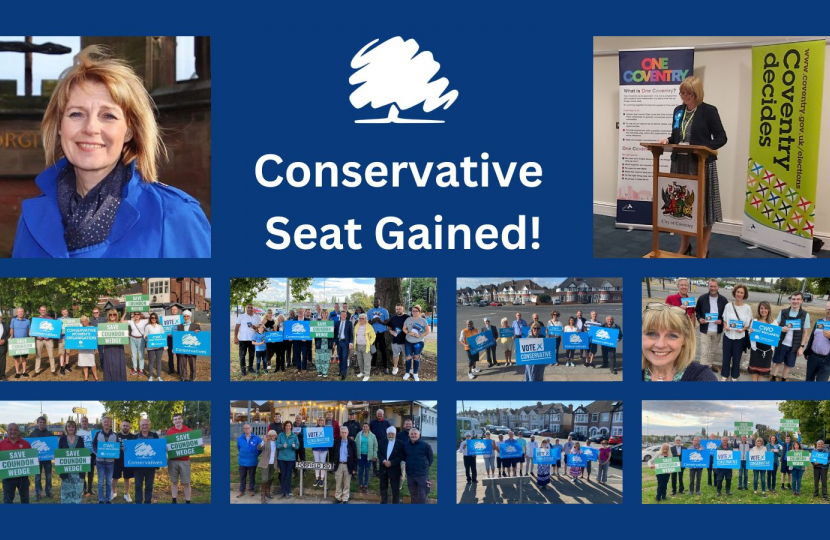 No doubt many of you are aware of the stunning success we had Thursday 22nd September 2022 in Sherbourne Ward winning with over 12% swing from Labour to ourselves and a 500 plus majority in a seat Labour had held for many years. This is after a very credible performance in Binley and Willenhall where we obtained a 3% swing but just failed to take the seat.

Huge congratulations to Jackie Gardiner, who is now the new Councillor for Sherbourne ward and will work side by side with Cllr Ryan Simpson. A massive thank you to the whole of the Coventry Conservative Team and everyone else who helped in this by-election. These results are no fluke and show that with hard work, campaigning strongly on local issues, it is possible to win and gain seats for the Party.

I would particularly like to mention, Barbara Mosterman, Deputy Chair Political, who after only 5 months in her new role has had to mastermind and organise 2 By Elections as well as getting to grips with all the other demands that the job entails. Well Done Barbara.

Coventry Conservatives are on the Up and now is a great time to encourage your friends, who are not members, to join the party. We have lots of events, a great social scene and reasonably priced dinners with interesting speakers. You are welcome to contact us through the 'Get Involved' section.

With all good wishes,

Chair of the Coventry Conservative Federation