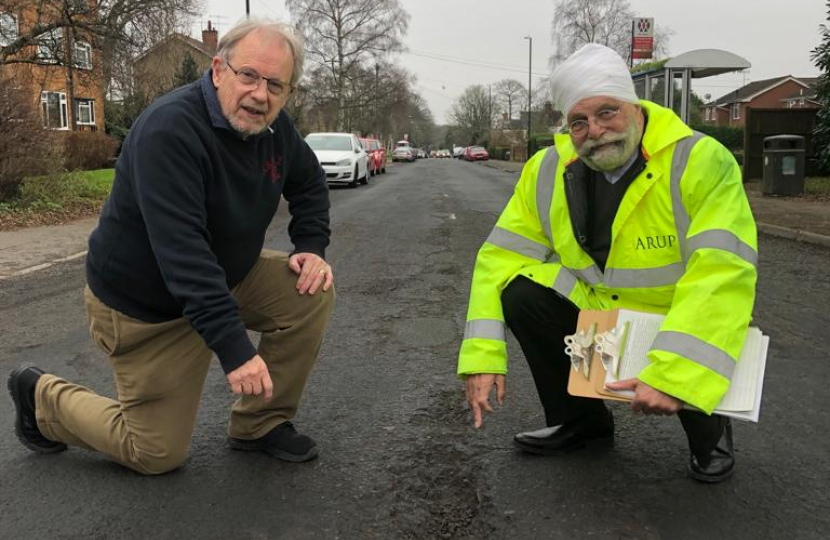 Residents have a gathered a petition with more than 500 signatures calling for improvements to the road surface on Birmingham Road. They say that a few years ago Birmingham Road was only resurfaced in part, despite assurances from the council that the full length would be completed.

Since then, the remaining 200m length of unsurfaced carriageway has deteriorated even further. Littered with pot holes which vary in shape and size, the surface is now causing distress to motorists who often experience a bumpy ride. The route is also used by heavy goods vehicles which accelerating the decline of the road surface.

Some homeowners occupying the nearby Victorian era cottages are even worried that vibrations from the ripped up carriageway are damaging the historic buildings. Also residents having to bear the noise and sound pollution disturbances.

They’ve received the support of local Bablake Ward Councillor, Jaswant Birdi, who has agreed to present the petition to Coventry City Council.

Commenting on the situation he said: “Many residents have been in touch with me about this issue, So I was very keen to give this petition my full support. It calls on the Council to improve the 200 metre stretch of Birmingham Road from Neale Avenue to Rye Hill bringing it up to the same standard as the part which has already been resurfaced.”

Local resident Philip Parry said: "It is disappointing that the council only resurfaced half of Birmingham road. Since that time road has further deteriorated, exacerbated by the increased HGV traffic from many lorries delivering to Amazon who do not follow the correct current signage. Local drivers have complained that their vehicles are being damaged while travelling over the rugged unsurfaced road."

The petition will be presented to a meeting of all Councillors on Tuesday 22nd February.