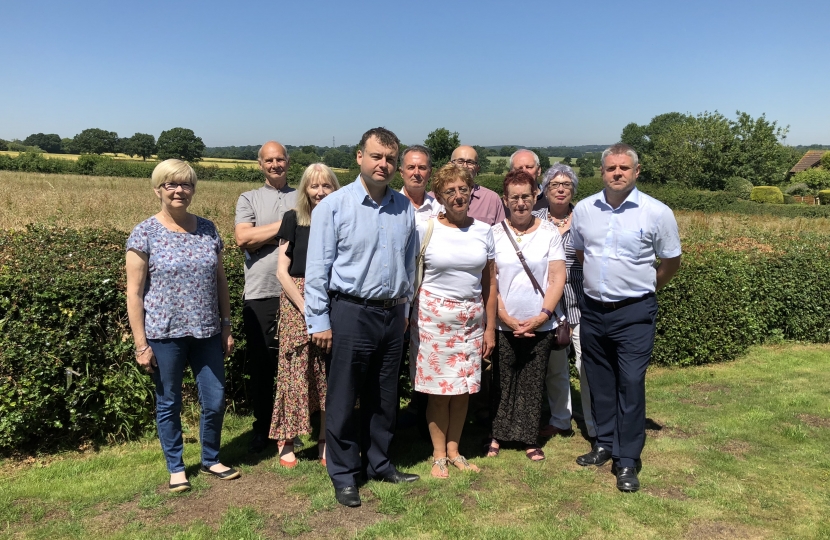 Furious residents in Allesley Green have accused developers of reneging on their promises to implement greenbelt development sensitively. They’ve received the backing of Woodlands ward councillors who’ve warned that the plans could have a bigger impact on residents than first thought.

Peterborough based Hallam Land Management, revealed the ‘Eastern Green Master Plan’ last week. After months of speculation it shows that traffic will be directed towards the accident black spot Hockley Lane. This has raised fresh concerns amongst campaigners who’ve been calling for road safety measures for years. The development also shows new housing backing onto existing properties sparking concerns that inhabitants will be overlooked.

On Appledore Drive in Allesley Green, where gardens are just eight metres long, local homeowner Jeremy Friend is one of the residents affected. He’s calling on developers to honour their pledge to establish a green buffer zone. He’s also angry and dismayed that the community were given just one week to respond during a consultation period.

The controversial proposal to develop Eastern Green was first announced in January 2016 and was opposed by Conservative councillors. The ‘Local Plan’ approved by Labour councillors also enables development at other local beauty spots - including Keresley and Coundon Wedge. It was created to support the Council’s plan for Coventry to become a ‘top ten city’.

With the Local Plan already agreed by Labour councillors residents accept some form of development is now inevitable. However councillors representing the area believe that developers have a duty to help mitigate the scheme as much as possible.

Commenting on the plans Woodlands ward Councillor Pete Male said; “Right from the start we’ve warned that this plan was a developer’s charter with no benefit to local people. We fought hard to protect the greenbelt however we accept that decision has now been made. With this in mind we entered into discussions with Hallam in good faith suggesting measures which may mitigate the impact in some way. However, the truth is their ‘consultation’ has so far been a sham. They’ve planned for even more houses, created more access points and ignored pleas from residents to maintain a buffer zone.”

Fellow Woodlands ward councillor, and leader of the Conservatives at the Council, Cllr Gary Ridley said; “Many people feel betrayed and disappointed by this inadequate consultation which looks a bit like a box ticking exercise. The lack of engagement has also prompted rumour and speculation, mostly around the future of the Windmill Hotel golf course which is not included in this master plan. People have been incredibly pragmatic in the face of this unprecedented development and a green buffer is not an unreasonable request. Hallam must listen to this feedback so that we can work towards the best possible outcome for current, and future, residents in the area.”

Cllr Julia Lepoidevin was also in agreement with residents and said; “Residents were promised a development which was sympathetic to the area with adequate infrastructure and a suitable green buffer - these plans appear to show no such thing. I’m also very worried that more houses could mean more traffic and congestion for the area. Since we were briefed by Hallam last year an extra access point seems to have been added which will direct traffic towards Hockley Lane. I’ve been campaigning to get safety measures there for some time as it’s already a dangerous hotspot. What impact will this volume of additional traffic have?”