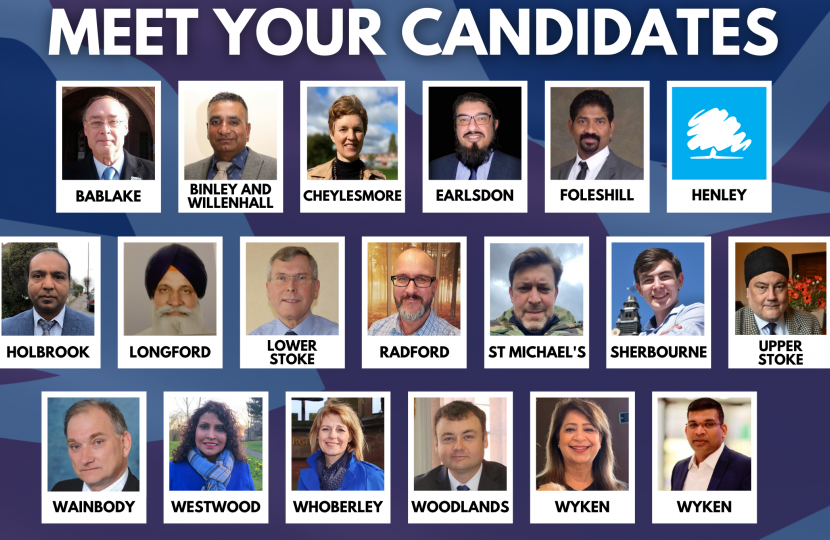 Ahead of this year’s local elections, Coventry Conservatives have unveiled their plan for a green recovery to get the city back on its feet after the coronavirus pandemic. Their five-year plan sets out plans to create thousands of sustainable jobs, tackle health inequality and improve service delivery.

Key to this plan is getting a new ‘gigafactory’ manufacturing electric car batteries into the city. To make this happen, they’ve pledged to work with Andy Street, the Mayor of the West Midlands on the plan which could create up to 4,000 jobs. They have also pledged support for the struggling high street in the form of parking concessions, reduced rents and a new High Street Challenge Fund.

Another priority is ending the scandal of ‘health inequality’ which means that a person dies on average ten years earlier in parts of the city. To do this they are pledging to tackle the city’s air pollution crisis with an ambitious transport package which could see three new train stations opening, along with more cycle routes. And they have pledged to protect the greenbelt and the open public spaces which have become a lifeline to so many during the pandemic.

In the longer-term tackling childhood obesity is key to tackling health inequalities. Coventry Conservatives will do this by building on the legacy of the Commonwealth Games, increasing participation in sport across the city. They will also ensure Plas Dol-y-Moch remains open as a teacher-led facility so that children can experience the active outdoor learning enjoyed by so many before them.

On service delivery, Conservatives say they will seek to find savings and efficiencies which will be redirected towards front-line services. They say they have already found £2.5 over the five-year period which will be spent on improved roads and road safety. They will also review the troubled refuse collection service and test the market to ensure taxpayers are getting the best deal.

Longer-term, they will seek to reduce debt which costs the taxpayer around £11m annually in interest payments alone. They will do this by prioritising debt reduction instead of investing in risky schemes like the failing Coombe Abbey Hotel.

Elections are being held to fill 18 seats across the city, as well as one vacancy in Wyken Ward, bringing the total to 19 seats. The Conservatives are contesting every seat and are hoping it will be all change at The Council House which has been under Labour control since 2010.

Commenting ahead of the elections, Conservative Group Leader Cllr Gary Ridley said; “The last year has been really tough for everyone but the vaccine roll-out has given us hope that better days are ahead. I know there will be many challenges as we recover from the pandemic but we have a talented and diverse team and a plan to turn our city around. Coventry is a beast which has been asleep for too long. We want to wake that beast and make Coventry a place where people choose to live, work and invest. Our plan for Coventry will ensure our city rises like a phoenix from the pandemic returning stronger and better than it was before.”

The full manifesto can be read as an attachment at the bottom of this page.