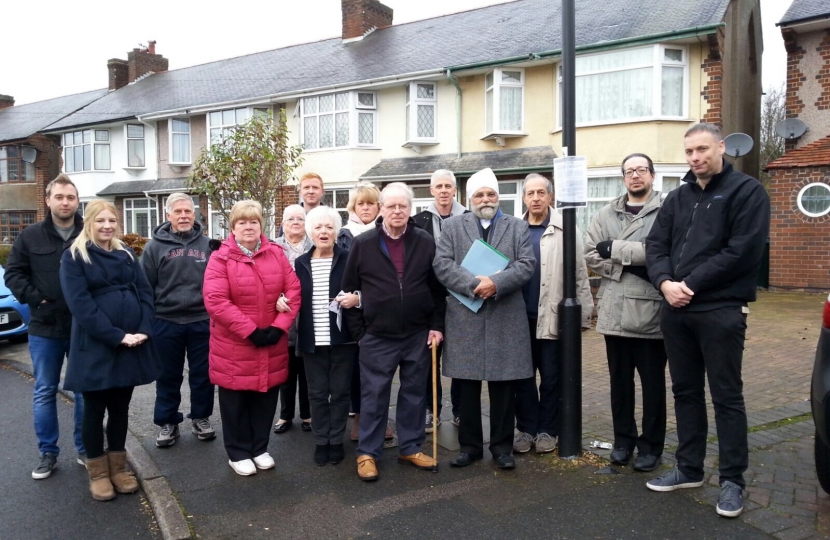 Residents in Coundon have vowed to fight proposals to install double yellow lines on Brackenhurst Road. Angry residents say there’s been hardly any consultation and they only found out about the scheme when they received a letter sent on 17th November.

If the proposals are given the green light it means some elderly residents will no longer be able to park outside of their own home. It’ll also reduce the availability of parking spaces on a street which is already congested even though Brackenhurst Road has had an excellent safety record.

They’ve enlisted the support of Bablake Ward councillor, Cllr Jaswant Birdi who will present a petition on their behalf at the next meeting of full council on 5th December.

Speaking on the plans Cllr Jaswant Birdi said; “Residents are worried about the impact that these waiting restrictions will have on parking on the highway. They’re also shocked at inadequate consultation that’s been carried out so far. I’ve been on site speaking to residents and within five minutes it was clear that there is very little public support for this. I’ll be presenting a petition on behalf of the residents and calling on the Council to cancel this silly scheme.”

Local resident Anthony French said; “I have lived here for 50 Years and never experienced adverse traffic problems, accidents or road blockages. Why suddenly the need for double yellow lines? We will fight hard to oppose any such action by the City Council."

Any objections should be sent to Mr R Parkes, Place Team, Legal Services, Coventry City Council, PO Box 15, Council House, Coventry, CV1 5RR or by email to ‘rob.parkes@coventry.gov.uk’. Any objection must state the grounds on which it is made and must be forwarded by no later than 8 December 2017