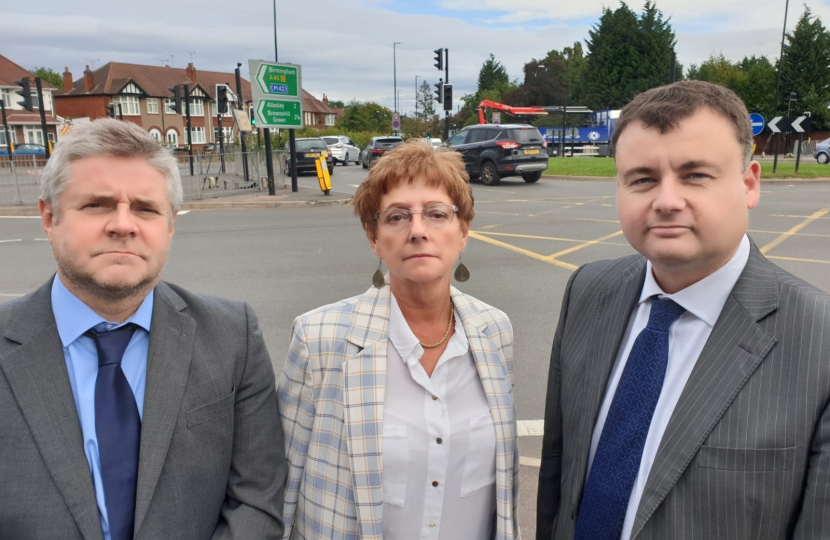 Councillors representing Woodlands Ward in Coventry are calling for a review of the layout of a busy junction in Tile Hill. They’re concerned that the layout of the A45/ Broad Lane junction could be contributing to a poor safety record, noise pollution and traffic delays. Councillors Ridley, Lepoidevin and Male who represent the area have been alarmed by a number of high profile accidents at the junction recently. In June, firefighters had to cut a driver free and in August the air ambulance was forced to land on the A45.

Dubbed the fourth most dangerous junction in Coventry by local media there have been six injury collisions in just three years since the junction was remodelled. It took five years to reach the same number of incidents before the remodelling of the junction according to figures provided by the Council. A significant increase in the volume of traffic using the route to avoid the M6 is also likely to increase the risk of accidents further, according to Council officers.

Although HGV drivers are advised to seek another route when there are problems on the M6 they continue to use the A45. This has created significant noise pollution for local residents day and night and contributed to regular tailbacks.

The current roundabout has been in operation since 2016 replacing a fully signal controlled junction with filter lanes. Although residents had raised concerns about the performance of the previous junction there have been concerns that the new alignment is over engineered. The councillors say three years is long enough to review the evidence and see if changes need to be made. They’ve now written a letter to the Cabinet Member with responsibility for highways asking for a meeting to discuss these concerns.

Commenting on the situation Cllr Gary Ridley, Woodlands Ward Councillor and Leader of the Conservatives at the Council, said; “Although HGVs aren’t supposed to use the A45 as an alternative to the M6 they clearly are. Many residents have told us the noise this creates is preventing them from sleeping. Worst of all the Council has admitted the extra traffic could even increase the risk of accidents. One accident is too many and that’s why we’re asking the Council to work with us to find solutions. Why should our residents have to suffer this for even one more day?”

Fellow Woodlands ward Cllr Julia Lepoidevin said; “This junction has been described as the fourth most dangerous junction in the city. However, I have a growing sense there’s almost an acceptance now from the authorities, and even some drivers, that this situation is somehow normal or acceptable. I would ask why should the residents suffer this is silence? However, it’s noisy, really, really noisy with the sheer volume of traffic cutting through from the M6. Surely we can find a better way than this?”

Also commenting Cllr Pete Male said, “It’s clear that we need a multi-agency response to this situation as there are currently several problems affecting this junction. With the safety record it’s got we need to be asking ourselves serious questions about the current junction and whether it needs improvement. The Council should also be challenging the Highways Agency about the arrangements they’ve got in place to prevent HGV’s using this route as a cut through. The Council needs to accept the severity of this situation and start identifying solutions. That process starts with reviewing the layout of the junction.”