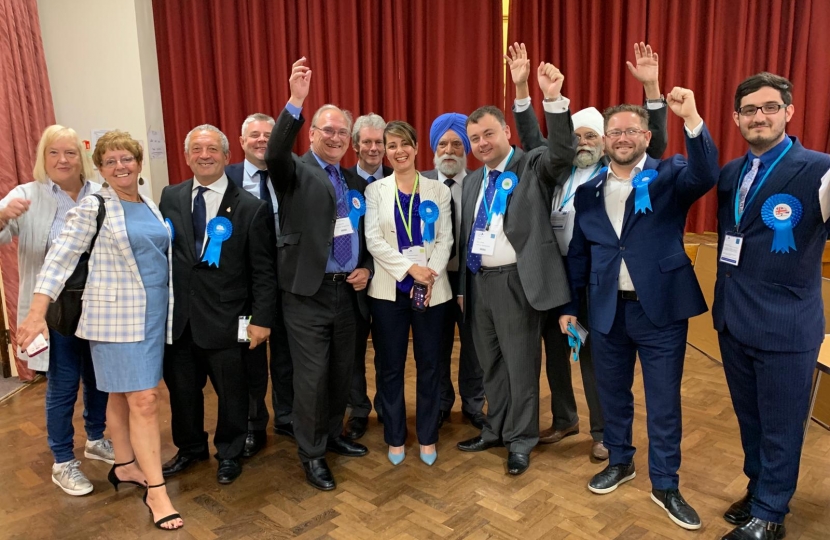 Coventry Conservatives are celebrating after holding onto Wainbody Ward with an increased majority. The result means that Conservative candidate Mattie Heaven will join Cllr John Blundell and Cllr Tim Sawdon, who also represent Wainbody Ward, at the Council House.

Despite a difficult backdrop nationally, the Conservatives increased their majority from 747 in May 2019 to 926 with a 5.4% bigger share of the vote. There was disappointment for Labour who crashed into third place and saw their vote slashed from 919 just a couple of months ago to 544.

The by-election was called following the sad death of former Lord Mayor Cllr Gary Crookes last June who had represented the seat since 1995. During the campaign Conservatives spoke out against the development of the greenbelt at King’s Hill and promised to give residents a strong voice in the Council House.

In her acceptance speech Cllr Mattie Heaven said; “A by-election following the death of a much loved Councillor is a necessary but sad event. Gary Crookes will be much missed and I pay tribute to his hard work and dedication over so many years. Over the past few months I have met many residents and I promise never to lose sight of their trust. I will work my hardest to represent all residents in Wainbody Ward in every way.”

Commenting on the result the Leader of the Council’s Conservative Group, Cllr Gary Ridley, said; “This is an exceptional result and a real testament to the hard work that Mattie and the team have put in. However, it’s also a decisive rejection of this failing Labour administration and a vote of confidence in our plan for Coventry. This will give us a real boost going into next year’s local elections and I’m looking forward to welcoming Mattie to the Conservative Group.”

Councillor Peter Male, who is the Chair of the Coventry Conservative Association, also commented; “This is an excellent result for Coventry Conservatives and for Mattie Heaven who led an excellent campaign. We’ve had support from councillors, activists and MPs from Coventry and further afield who’ve all helped to make this result possible. In particular, we have an excellent team of councillors in Wainbody Ward and I’d particularly like to thank Cllr John Blundell who served as Mattie’s agent.”