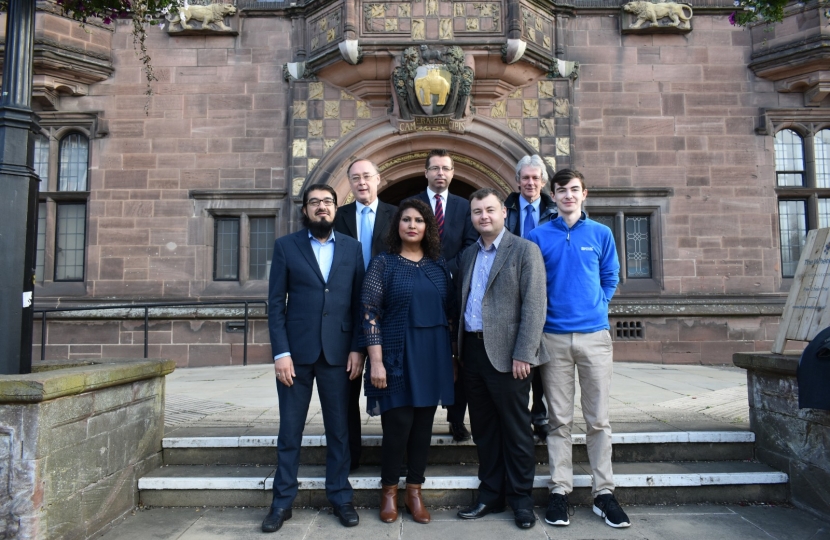 Conservative members in Coventry have been voting to decide who will represent the party in the next set of local elections in May 2020. At a packed meeting four candidates were selected to contest some of the key battleground seats in the city.

Following an excellent result in last week’s by-election, Conservatives are hoping to make gains at next year’s elections when a third of the city’s 54 seats will be up for grabs. However, two of the candidates selected are hoping to replace existing Conservative Councillors who announced their retirement earlier this week.

In Earlsdon Ward, Zaid Rehman will hope to replace Cllr Allan Andrews with Asha Masih contesting Westwood Ward instead of Cllr Tim Mayer. In Bablake Ward Steve Keough will take the fight to Labour and in Sherbourne, the city’s most marginal seat, 20 year old Ryan Simpson will campaign to oust the Labour incumbent.

Prior to last night’s meeting, Cllr Gary Ridley had already been confirmed to contest Woodlands Ward next year along with Cllr John Blundell in Wainbody Ward. Conservatives are expected to select candidates for the remaining seats in the next couple of weeks.

Commenting on the announcement the Council’s Leader of the Conservative group Cllr Gary Ridley, said; “I’m really sad that we’re losing quality people like Allan Andrews and Tim Mayer but I’m excited by the new people we have coming through. The candidates we’ve selected represent a broad and balanced mix of people with a range of different life experiences. Their enthusiasm will energise our campaign and help to make Coventry Conservatives a more diverse organisation. Over the coming months we will be talking to residents about our plan for Coventry, explaining to residents that another way is possible.”

The selection process was overseen by the Chair of Coventry Conservatives, Cllr Peter Male, who said; “I’d like to thank our members and candidates who’ve taken part in this process which has demonstrated how many talented people we have rising through our ranks. I’m confident that they’ll go on to have successful careers in politics and make a real difference for the people of Coventry.”

Asha lives in Coventry with her husband and two children, she works for the NHS as a Bio medical lab assistant. Asha’s role within the Conservative Association is Deputy Chair of Diversity and Communities. She works to bring communities together, promoting equality and diversity and volunteers for charities, feeding the homeless, visiting lonely and vulnerable people and is also a Godiva sister. Asha said; “It is an honour to be selected for Westwood Ward and I know that Cllr Tim Mayer will be a very hard act to follow. The Coventry Conservatives manifesto gives residents a real alternative to this failing Labour administration and I will work tirelessly with Tim, David and Marcus to help Westwood residents get the services and resources they deserve.”

Ryan's priorities for Sherbourne residents include the campaign for a new railway station at Coundon, protecting our green spaces. He also opposes the introduction of a Clean Air Zone that will disproportionately affect local people in the Sherbourne area. Ryan said "After having made Coventry my adopted city in the West Midlands region as a result of my studies, I want to help realise the potential in Coventry that is being held back. After last May's closely fought election in Sherbourne, we saw residents here are crying out for change in our city and I intend on taking their views and concerns to the city's failing Labour Party administration."

Steve was born in Coventry and educated at Warwick university.  He’s now retired after a successful career in industry, catering, local Government, customer services and the financial sector. In recent years he’s spent his time volunteering for Age Concern and at the local library. Steve said; "Bablake is geographically the biggest ward in Coventry with large areas of green belt land. Conservative policy is to protect the green belt and I will make it a priority as stated in our local manifesto. I look forward to working hard with local Councillors Birdi and Jandu for the residents of Bablake Ward."

Zaid is a born and bred Coventrian, family man and entrepreneur. He wants to ensure resident’s views are heard and their priorities are acted upon. Involved in various community projects, he’s helped to deliver improved outcomes for residents. Zaid said “I’m delighted to have been selected as candidate for Earlsdon Ward. I’ve lived in the ward for a long time and see the issues faced by residents on daily a basis. I want to ensure residents get the best value for money front line services, improved road safety and more policing. The current administration needs to be held to account and scrutinised for their failing policies.”