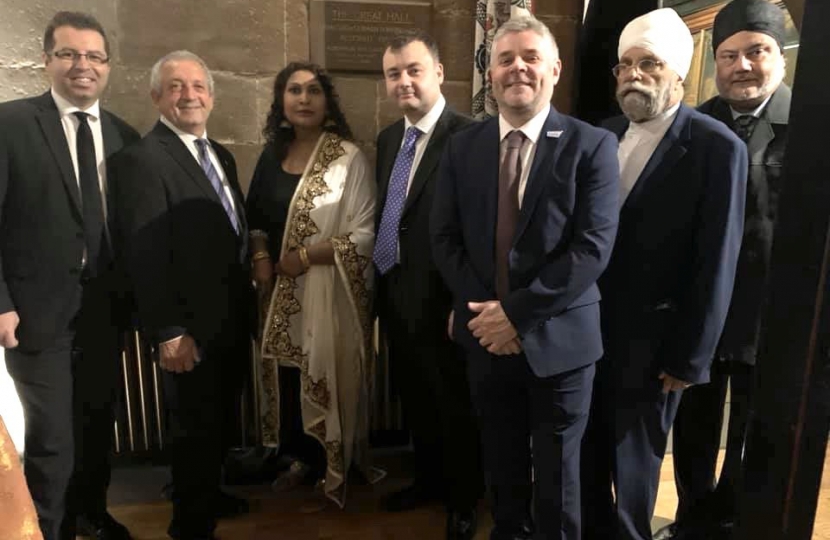 Representatives from a number of other faiths were present along with the Deputy Lord Lieutenant for the West Midlands, Colonel George Marsh and Consul General of India, Dr Aman Puri. Mayors and Deputy Mayors from across the West Midlands were also in attendance.

During the event guests heard speeches from academics about the life and times of Guru Nanak who was born in Talwindi in modern day Pakistan. Hailed as the founder of Sikhism, he is an important figure who fought for equality and fairness for everyone, particularly women and the oppressed.

The occasion has been marked by the city’s 25,000 Sikhs in a number of different ways. They have taken part in prayers in temples, enjoyed sporting events and taken part in tree planting. There was also a procession through the city on Sunday.

There are 25 Million Sikhs across the globe and almost half a million in the UK. When they first arrived in UK in the 1950s there was nowhere for them to worship. Today there are 300 temples across the country, with several in the city.

Commenting on the event Cllr Jaswant Birdi said: “This is the first time a dinner has been held in St Marys’ Hall Guildhall to pay homage to the founder of the Sikh religion. It was a truly memorable event with representatives from across the community taking part. It shows that in Coventry there is a real desire to bring our multicultural community together in a spirit of peace and harmony. In particular, I’d like to pay tribute to Cllr Abdul Khan for hosting for honouring the Sikhs First Guru, Guru Nanak dev je on his 550th Birth Anniversary”

Leader of the Council’s Conservative Group, Cllr Gary Ridley said: “His words have inspired many over the years – including myself - and they have certainly inspired our city. He was strongly opposed to discrimination in all its forms, both in word and deed. That is a message our city lives by, both here at home, and in our work around the world to bring people together in peace and friendship. We are committed to putting equality and inclusion at the heart of everything we do. The strength of Coventry lies in its diversity – from our communities to our workplaces, our schools and our cultural life. The teachings of Sri Guru Nanak Dev Ji are a vital part of that.”

This anniversary is momentous for Sikhs as it coincides with opening of the pilgrim route between Dera baba Nanak in India to Kartarpur in Pakistan, The Holiest Sikh Shrine. Known as the kartarpur Corridor, its Construction commenced in November 2018 and was opened on 9th November 2019 by the Prime Minister of Pakistan Mr Imran Khan.

Guru Nanak lived a full life and left a legacy which is still as strong today. During his life: