Calls for Planning Inspector to intervene in Greenbelt plans 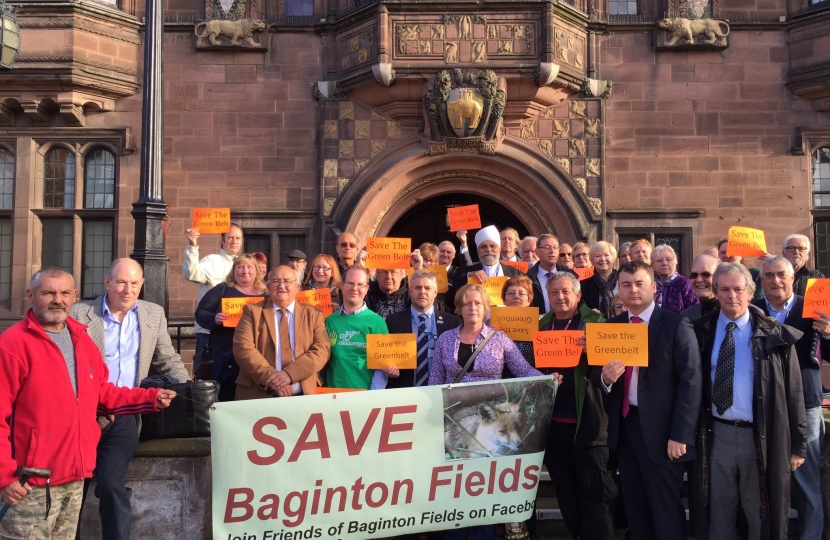 Former greenbelt land at Eastern Green in Coventry could end up with almost an extra thousand houses on top of what had previously been agreed. That’s almost 50% more than the 2,250 agreed in the Local Plan.

The claim was made by Labour’s Cabinet Member for planning who says that the figures in the Local Plan are just a ‘minimum’. It follows the submission of a planning application at Eastern Green by developers Hallam. It contains a request to build more houses one section than was originally planned for the entire former greenbelt site.

It’s promted Councillors representing the Woodlands and Bablake Wards to contact the Planning Inspector to clarify how many houses the Council are allowed to build. They want to know whether the higher level of development could actually be a breach of planning law. In a letter to the Inspector they warn that the Council is ignoring its own agreed plan which could lead to overcrowding placing a strain on existing infrastructure and services.

Their intervention follows the news that several key government bodies including the NHS, Highways England and the Environment Agency have objected to the planning application. Each organisation has warned that existing infrastructure can’t cope with the scale of the development proposed. They argue the plans would put a strain on the city’s hospital, increase the risk of flooding and overwhelm transport networks.

Commenting on the situation Cllr Peter Male said; “It’s clear the Council has no intention of honouring its own Local Plan. So we’ve sought clarification from the planning inspector on whether this application is in breach of it. Make no mistake, once the greenbelt is gone it’s gone forever and cramming an extra 1,000 houses on Eastern Green would be a disaster for this community. Residents have been lied to at every stage of this process but this final act of betrayal will take a long time to be forgotten.”

Fellow Woodlands ward councillor and Leader of the Conservatives at the Council House, Cllr Gary Ridley said; “We fought this developer’s charter but the odds against us were too strong. So we accepted it was inevitable and engaged in the ‘consultation’ process. Residents were given assurances about the scale of the development and their ability to influence the final design. That appears to be another broken promise from this failing Labour administration. With objections from the Environment Agency, Highways England and the NHS when will the Council realise this is a bad idea?”

Another Woodlands ward councillor, Cllr Julia Lepoidevin said; “We need a Local Plan for local people yet this planning application is completely developer led. They’re looking to make a quick buck by cramming in even more dwellings to the detriment of existing residents, and future ones. This just isn’t good enough and the Council should rebuff this plan in favour of something more modest. They should also listen to the objections made by other agencies.”

Jaswant Birdi said; “If Labour are going to run roughshod over their own plans what on earth was the point of saying they would build 2,250 houses in the first place? They seem to think they can do whatever they like despite opposition from residents and key government agencies. The overdevelopment of Eastern Green is sickening to the local residents who will have to live with it for years to come.”